TFortis TELEPORT – are devices that allow to transmit states of dry contacts a nd RS-485 over Ethernet network. The connection between TELEPORT inputs and outputs is configured using WEB-interface.

Perimeter sensors are connected to TELEPORT-2 that transmits the state of sensors over Ethernet network to TELEPORT-1 in a server room. TELEPORT-1 is connected, eg, to BOLID Signal-10 device. If the perimeter security system uses a PC instead of the console, a virtual COM port is installed on it, and packets from the perimeter sensors are sent to this COM port. TELEPORTs can be used to raise a barrier or to switch on the spotlight in a particular point of security area. For this purpose actuating signal is applied to the input of TELEPORT-1. TELEPORT-1 transmits it over Ethernet network to the remote TELEPORT-2 that by means of relay output switches the automation on. 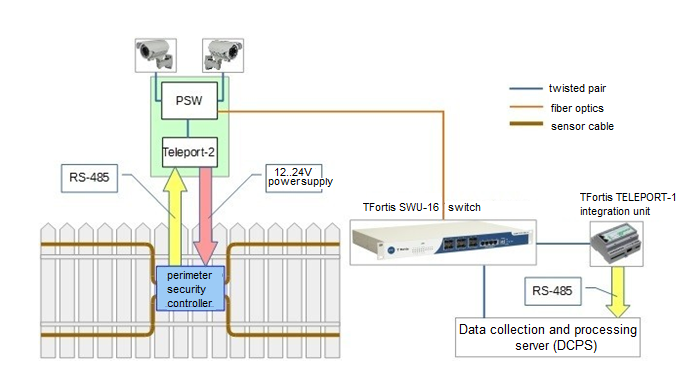 Scheme: Integration of the perimeter security system with a video surveillance system based on TFortis PSW.