RU EN
+7 (342) 270-112-8
Made in Russia
TFortis equipment is used in Russia, CIS, Europe, Turkey, the Gulf countries and a number of other regions.
Main — Support — Generic solutions — How to design a video surveillance solution for the warehouse
Download TFortis catalog Production catalog

How to design a video surveillance solution for the warehouse

The purpose of this paper is to show how to deploy an IP surveillance network using TFortis monitoring equipment. This document is aimed to provide general overview and does not constitute design documentation. However, it can be used as a basis of further system design.

The following needs to be arranged:

Security video surveillance should operate 24/7. Outdoor elements of the system should be weatherproof (normal operation at the ambient temperature from –40 to +40 ˚C (from -40 to 104 F), dust and moisture protection casing at least IP66), lightning proof.

The video surveillance system should be equipped with a UPS battery backup to support the desired runtime in case of power outages until power is resumed.

The video surveillance server and the central switch should be located inside the checkpoint building.

IP cameras are installed on lamp posts around the perimeter of the premises, two cameras on each post. Pointing direction should be along the fence.  Total number of the lamp posts: 13.

PTZ IP dome cameras for process monitoring should be located on the front walls of the warehouses.

Figure 1 shows the layout of the elements on the premises.

Cameras installed on the lamp posts along the fence.

Distances between the cameras may reach up to 100 m. Therefore, it will be necessary to select proper lenses to get the required view angles.

However, they have low dust and moisture protection rating and cannot operate at low temperatures. Therefore, they have to be installed inside camera housings.

For this purpose, it is possible to use 2MP Beward BD3270 IP cameras. 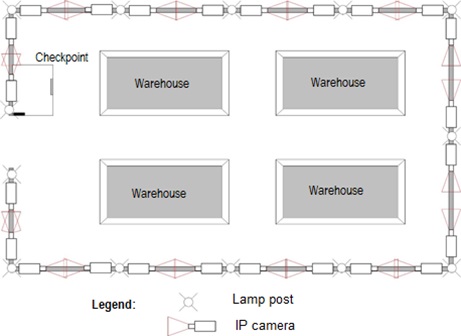 Figure 3. Layout of IP cameras along the fence.

The total number of cameras shall be 24, which includes 2 cameras on 11 posts around the perimeter (22 in total), plus one camera on each of the two posts at the entrance gate.

These cameras should be installed on the lamp posts located at the entrance gate. They will monitor the activities at the entrance gate, rather than in the distance.  Therefore, cameras with non-interchangeable varifocal lenses, about 3-12 mm, shall be fit for purpose and provide the required coverage. Outdoor bullet cameras designed for the specific temperature range will be suitable for this application.

Backup power supply for IP cameras around the perimeter.

A few options are possible.

A UPS may be installed inside the checkpoint building. In this case it will be necessary to install another 220 V cable parallel to the existing power supply system of the lamp posts to supply the cameras and switches.

The disadvantage of this option is that due to the long perimeter length (1600 m), costs of cable purchase and installation will be considerable. In addition, it will take longer.

The second option is to install UPS and other equipment inside weatherproof enclosures on each post and supply them from the power supply system of the lamp posts. However, it is important to note, that the price of weatherproof enclosures is rather high.  For this reason some installation specialists use a regular metal enclosure, which they cover with heat insulating material and put heaters and temperature regulators inside. If done carefully and appropriately, this approach may be effective. However, it is impossible to test the self-made enclosure in a laboratory and only life will show whether such an enclosure is actually fit for purpose. Another thing is that the enclosure will contain a UPS with a lead acid battery, which is known to change its properties depending on the temperature. In addition, it takes time to produce such a tailor-made solution. In our case, at least 10 such enclosure will be required. Making them will take time and may lead to inability to meet project deadlines, loss of money and reputational damages.

Therefore, a conclusion can be made that this method of UPS installation is either too expensive or time-consuming and unreliable.

A third option is to use TFortis PSW-2G4F-UPS switches. These are outdoor switches (IP66, –45 to +40°C (-49 to 104 F)) with an integrated UPS system that do not need to be installed inside a weatherproof enclosure. They may supply power to the cameras using PoE technology. Since all cameras selected for the perimeter surveillance support this technology, application of such a switch provides a number of advantages, eliminating the need for additional cabling and power supply units for the cameras. The switch has integral lightning protection for 220 V power supply and the Ethernet ports. The switch is shown in Figure 5.

The switch is also able to resolve the problem of IP cameras hanging. It can detect hanging of the camera. When that happens, the switch will reboot the camera by removing the PoE and then supplying it again. The camera will continue to operate properly. 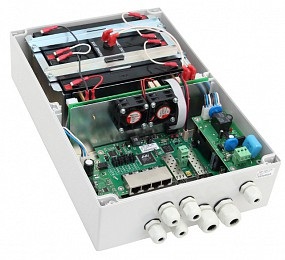 The layout of the switches is shown in Figure 6. According to Figure 6, 10 TFortis PSW-2G4F-UPS switches will be required. 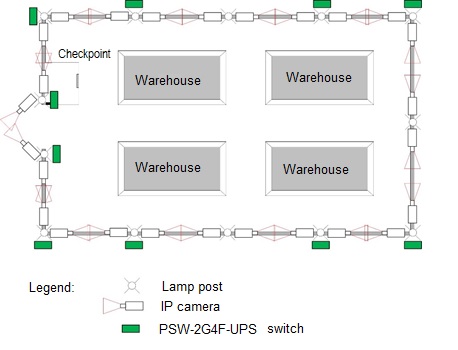 There are various options to supply power to camera housings. A camera housing may be supplied from 220 V power grid, from 12/24 V voltage source or from PoE.

The selected TFortis PSW-2G4F-UPS switch has a unique feature: it can use the same cable to supply PoE both for the camera and the camera housing, which provides a significant advantage by eliminating the need for an additional cable for the camera housing. In our case, when the switch is connected to a camera from the neighbouring lamp post, a single twisted-pair cable will be required. There are 6 such places on the drawing. It means, we save at least 600 m of additional cable for the power supply of camera housings. TFortis TH camera housing will provide another important advantage, eliminating the need for preliminary heating in case of low ambient temperatures.

How this function operates.

Speed dome cameras for the control of vehicle movement and handling operations should be located on the front walls of the buildings. These cameras should also be able to operate in the range between –40 and +40°C (-40 to 104 F). We are going to use 2MP AXIS Q6045-E IP cameras that meet the above requirements. When the heating is on, a camera will consume up to 60W. HighPoE power supply is supported.  Four such cameras will be required.

Hikvision DS-2CD4224F-IS bullet cameras will be located at the side entrance gates in the warehouse to monitor processes. We will need 4 such cameras as well.

The total number of IP cameras for process monitoring shall be 8.

Since distance A (Figure 1) between the warehouses exceeds 100 m, it will be convenient to consolidate the cameras into groups of 4 (2 PTZ cameras and 2 bullet cameras) using switches, and then connect these switches to the central switch using optical cable.

The layout of process monitoring cameras and switches is shown in Figure 7. Dash lines show groups of devices. 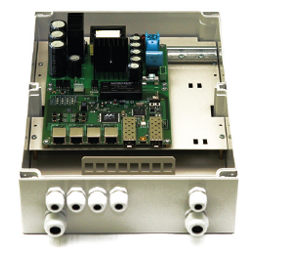 In order to connect security video surveillance system, process monitoring system and a video server into a single network, a central switch shall be required.  This switch may be selected only when the topology of the network becomes clear and we know the required number of ports in the switch.

The layout of selected equipment is shown in Figure 11.

There are two ways how switches may be connected to each other: Y-connection and serial connection (Figures 9 and 10).

In case of Y-connection, distances from the central switch to most of the switches on the lamp posts shall be long, over 100 m. Therefore, optical cable should be used. Y-connection of the switches has significant disadvantages: a multicore optical cable will have to be used (one core for each switch), which is more expensive compared to a single core cable used for serial connection.

Figure 11. Layout of the network elements on the premises.

Therefore, we are going to use serial connection. But then, why don't we close this circuit into a «ring» to provide backup and increase reliability of the network? The matter is that a «ring» may not be used with some types of switches. In a closed loop, packets will multiply (as they go round the loop), which will disrupt the switching tables and cause snowballing traffic increase. This may lead to hanging of the network equipment and failure of the entire network.

To solve this problem, managed switches with integrated STP/RSTP protocol may be used. This protocol is able to detect odd links and block them at the logic level, leaving only the relevant links. In case of physical breakdown of the cable (the circuit is no longer connected into a loop), the logic of the network will adapt quickly and the network will continue operation as if there is no breakdown. This technology helps to increase fault tolerance of the network.

It's important to remember, that IEEE802.w standard does not recommend to include more than 7 switches into a ring with standard parameters of RSTP protocol. That's why we will make two rings around the perimeter. We will number the switches and include odd switches into one ring and even switches into the other ring. That way the distance between the neighbouring switches will be at least 200 m, which means we can only connect them using optical cable. Let's use a double-core cable and connect 5 odd switches to one core and 5 even switches to the other core (Figure 12). 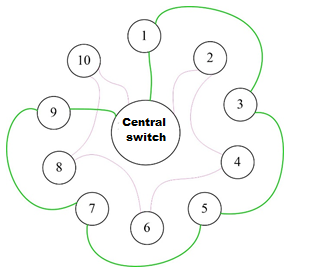 Figure 12. Connection of the switches in a loop.

According to Figure 12, each switch should have at least two optical ports and each port should be able to operate at 1000 Mbit/s minimum to carry the large total traffic.

TFortis PSW-2G4F-UPS switch selected earlier has two SFP ports able to operate at 1000 Mbit/s. It also has STP/RSTP protocol and is therefore fit for purpose. We will be able to use ring topology of the network.

Process monitoring switches will be connected in series with each other and with the central switch by means of optical cable. This part of the system is not related to security video surveillance, that is why we are not going to provide backup traffic routes and backup power supply. To connect optical cable to the central switch, we will use TFortis FC-2 media converter.

A simplified network scheme is shown in Figure 13.

According to Figure 13, the central switch needs four SFP ports to connect optical cables. Since we are using a loop topology, the switch should have an STP/RSTP managed protocol. This switch should include at least two RJ-45 gigabit ports to connect to the server and FC-2 media converter. TFortis SWU-16 switch meets this requirement, as it has 12 SFP ports and 4 RJ-45 gigabit ports. 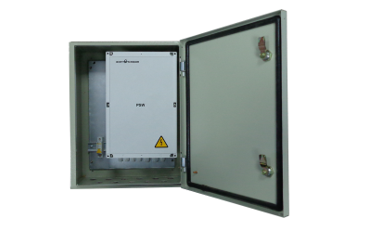 Architecture of the video surveillance network with the selected topology is shown in Figure 15.

Equipment layout on the premises is shown in Figure 16.

The list of equipment used is shown in Table 1.