BEWARD BD137P video camera is very popular among integrators of video surveillance systems: 3-megapixel high-speed rotary camera is equipped with high-quality heating and is designed for professional video surveillance in harsh environments.
BD137P is equipped with a 30-fold zoom lens, which allows you to obtain a detailed image of objects that are at a great distance. The “Auto-Calibration” function provides high accuracy of camera positioning. The video camera supports an effective H.264 High Profile video signal-processing format. The lightweight and compact size of the video camera facilitate installation and reduce vibration when mounted on an object with insufficient rigidity, such as tower.
A key feature of the BD137P model is the ability to provide power supply, data transmission and PTZ control over a single cable due to the UltraPoE support. This saves time when installing the cable route and reduces the total number of cable lines. UltraPoE with 60W power ensures reliable operation of the heating system, rotary mechanism and motorized camera lens even at very low temperatures. Effective heating of the dome allows avoiding the formation of ice and frost on it and, as a consequence, guarantees a permanent and full view.
BEWARD BD137P is an excellent solution for the harsh climate and operates over a wide range of temperatures, while maintaining the declared functionality. The “safe cold start” function enables the camera to be turned on in normal mode at low temperatures. When the power is supplied, firstly, heating and ventilation start their operation and when the minimum permissible operating temperature has been reached inside the casing, the video camera is turned on. This operation mode allows preventing premature wear of the video camera.
For powering video camera, manufacturer recommends using UltraPoE midspan BEWARD STL-11XP. Midspan is designed for indoor operation, so in the case of the outdoor video surveillance networking, this midspan must be installed in a heated cabinet.
An alternative is to connect the video camera directly to the PoE switch. However, integrators often have a question: Can BEWARD BD137P video camera be powered by PoE/PoE+ switch?
We will briefly review PoE-technologies, and we will understand what UltraPoE is.
PoE
The IEEE802.3af-2003 standard or PoE provides power for devices that support PoE with max power of 15W. Power is supplied either via the same pairs of cables that data is transmitted through (pairs 1-2 and 3-6), or via “free” pairs (pairs 4-5 and 7-8). The power supply is shown on Figure 1. Here, the power supply (PoE-midspan) is an integral part of the switch, and the receiver (PoE endspan) is an integral part of the camera.
“Communication” of the PoE source and the PoE receiver occurs in the same way: either via pairs with data, or via “free” pairs.

Figure 1.
Over time, for some types of video cameras, 15 W power was not enough, so new power options such as PoE + and UltraPoE have appeared to power these video cameras.
PoE+
The IEEE802.3at-2009 standard, also known as PoE + or High PoE, is a logical extension of the IEEE802.3af-2003 standard (or “simple” PoE) and provides power to network devices (particularly video cameras) with max power consumption of 30W through a standard twisted pair over an Ethernet network. Voltage can be supplied either via the same pairs of cables that data is transmitted through (pairs 1-2 and 3-6), or via “free” pairs (pairs 4-5 and 7-8).
Thus, the principle of power supply and connection of the source with the PoE receiver is absolutely the same here as in the IEEE802.3af standard.
PoE+ (60W)
PoE + (60W) can power devices with max power consumption of 60W. Since the IEEE802.3at standard does not provide power to devices exceeding 30W, while the power consumption of some dome rotary camera models often reaches 60W, camera manufacturers of this type offer various solutions, one of which is PoE + (60W). The power supply is provided on Figure 2.

Figure 2.
As shown on Figure 2, two independent channels are used for power supply. On the side of the switch, one source supplies power via data pairs and the other via “free” pairs. On the side of the camera, 2 independent receivers are used and the current is summed up at the output and fed to the “load”. Each PoE source establishes a connection to the PoE receiver on a separate channel. This solution is sometimes called as “dual PoE +”.
This option is used by Axis in Q60 series cameras and is supported by TFortis switches.
UltraPoE
UltraPoE is an alternative power supply via “twisted pair” to the video camera with max power consumption of 60W. BEWARD uses it to power dome rotary video cameras of its own production of the BD13xP series, including the BD137P. The power scheme using UltraPoE is shown on Figure 3.

Figure 3.
This option allows you to get twice the power transmitted via the “twisted pair”, using only one source in the switch and one receiver in the video camera. “Communication” of the PoE-source with PoE-receiver occurs over single channel, the second channel is used exclusively for power supply.
The features of the presented power supply options are summarized in the table.

Let’s return to the question of the possibility of powering the BEWARD BD137P video camera by switches supporting PoE/PoE+.
A switch with PoE+ support can power a video camera, giving at the most 30W. If the consumption of the video camera exceeds 30W (for example, when the heating is turned on), the switch will de-energize it.
A switch with PoE+ (60W) support can power the video camera in only one mode: A or B, with a maximum permissible load power of 30W. When the camera turns on the heating, it will turn off.
Thus, simple PoE+ and PoE+ (60W) switches will not be able to ensure the correct operation of the BEWARD BD137P. The video camera will only operate until the heating is turned on. Therefore, to power the UltraPoE video camera, it is suggested to use either a midspan from the manufacturer, or a switch supporting UltraPoE, for example, TFortis PSW.
Joint operation of TFortis switches and BEWARD cameras
UltraPoE support is implemented in TFortis switches, along with PoE +. Due to this, joint operation of switches with dome rotary cameras BEWARD (compatible TFortis switches that have “+”in the name) became possible.
Testing the joint operation of the TFortis PSW-2G +, TFortis PSW-2G6F + and TFortis PSW-2G2F+UPS switches with the BEWARD BD137P camera showed stable operation and stable start of the camera both at positive and negative ambient temperatures. Particular attention was paid to turning the camera on in the “cold start” mode at low temperatures: -20 to -40 °С. The camera was cooled for 2 hours with turned off power.
The dependence of the camera heating time on the ambient temperature after power-up is shown in Fig. 4. At the end of the warm-up period, stable start-up and operation of the camera were observed.
With a cold start during warm-up, the power consumption of the camera was about 36W. When the heating was turned on and during the subsequent operation, the power consumption of the camera was 54 W. 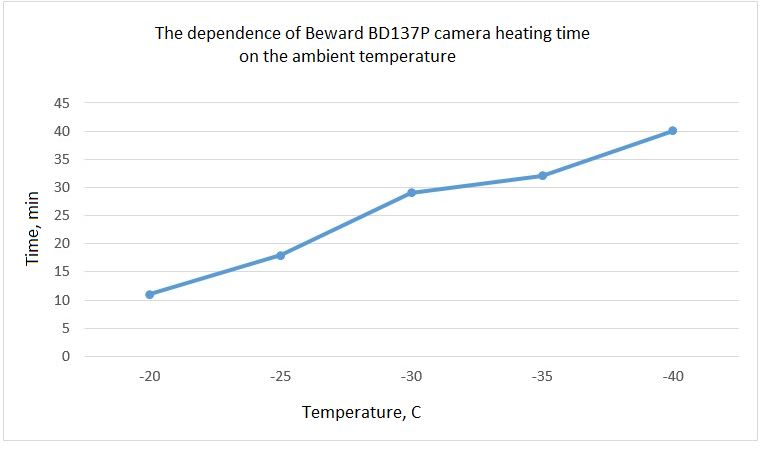 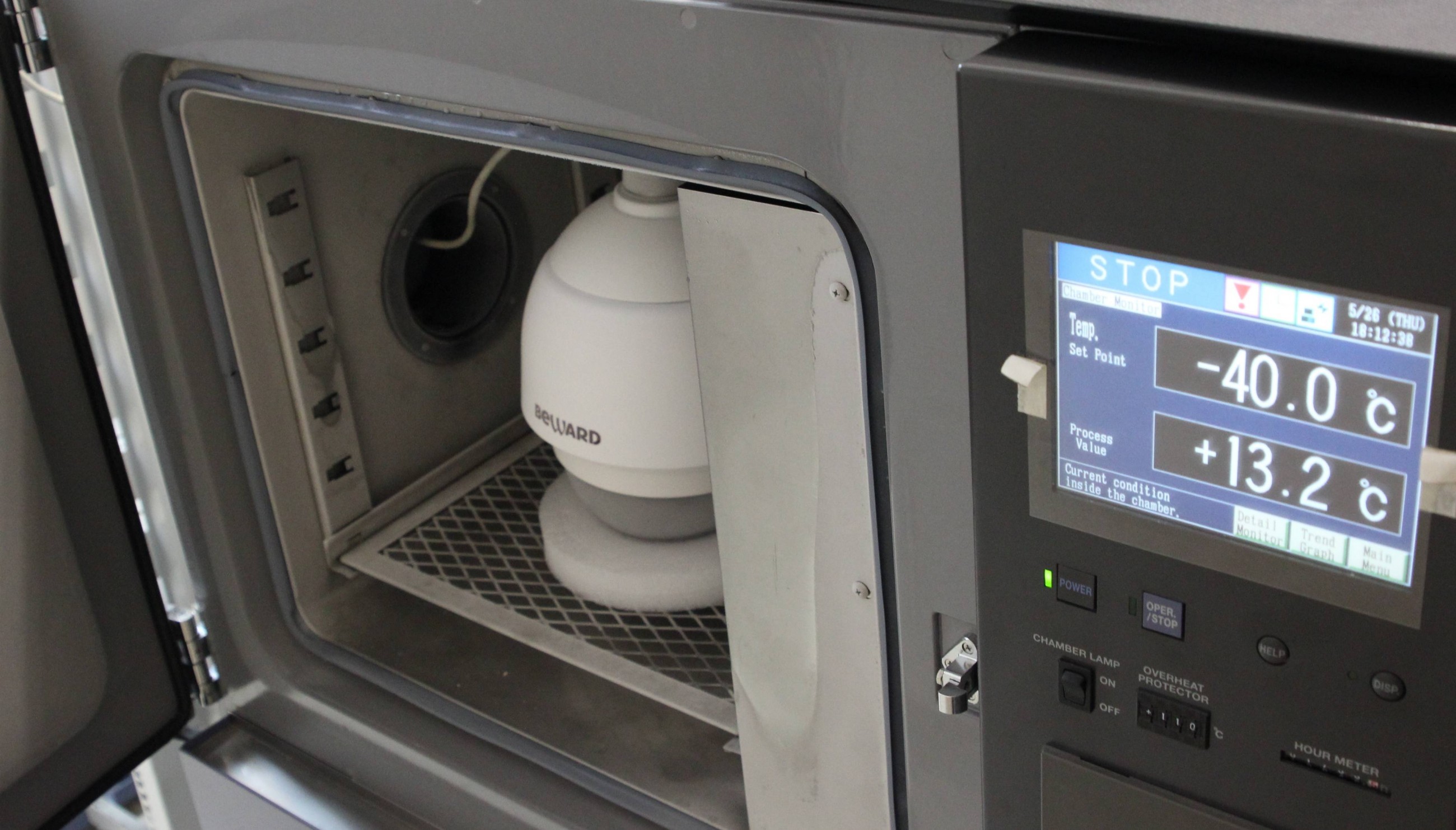 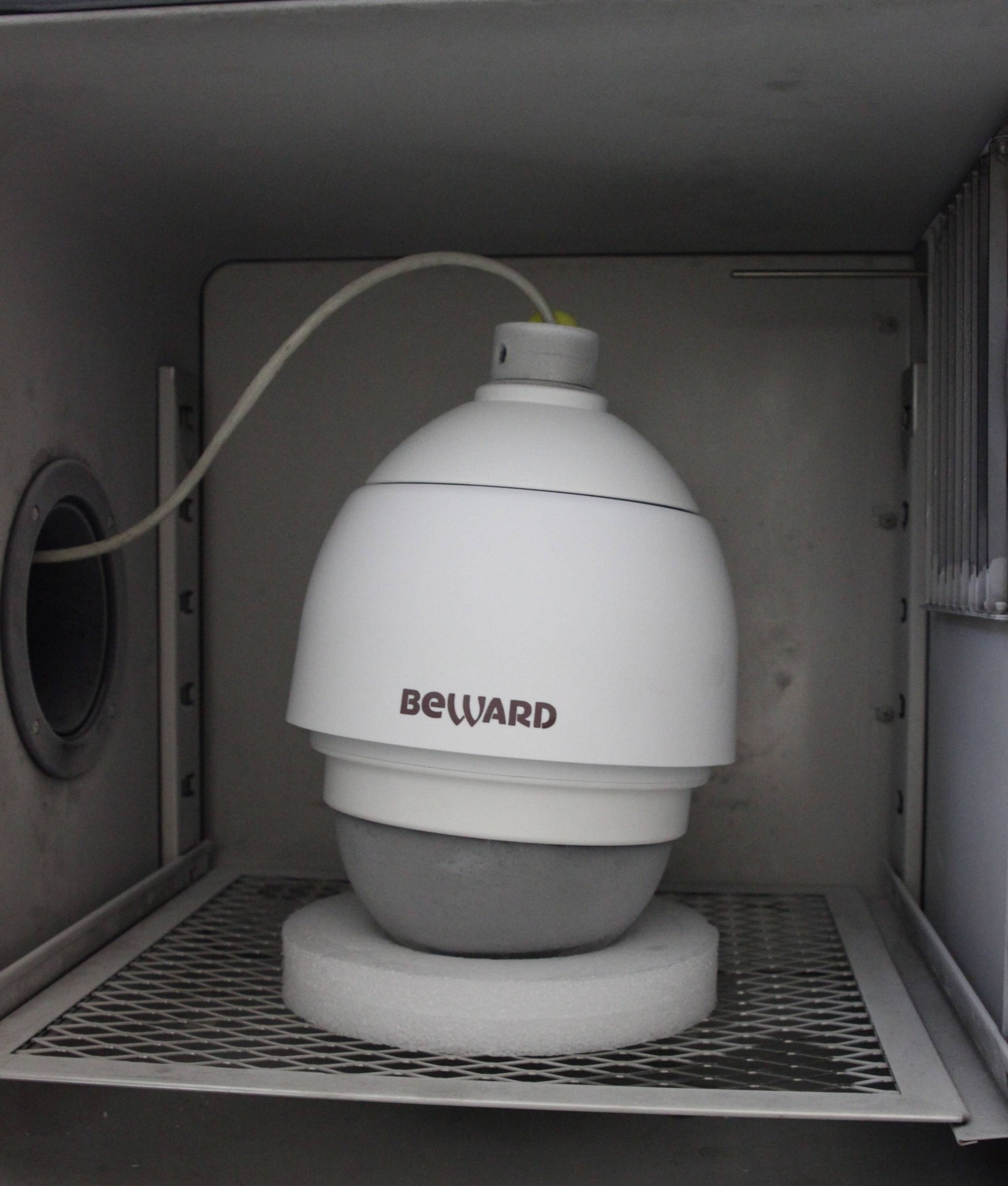 The tests confirmed the stable operation of the BEWARD BD137P camera with TFortis switches supporting UltraPoE. Thus, the equipment is recommended for joint use by Fort Telecom.