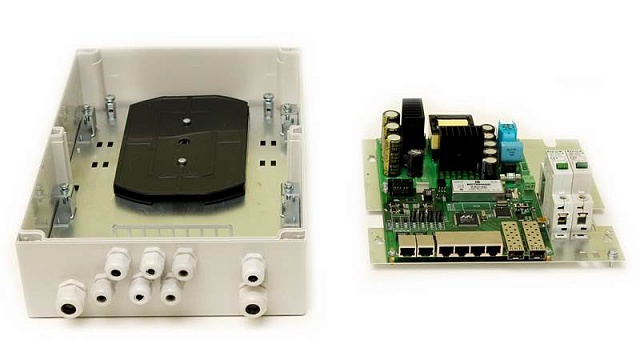 PSW-2G6F+ Switch is an integrated solution. It includes: 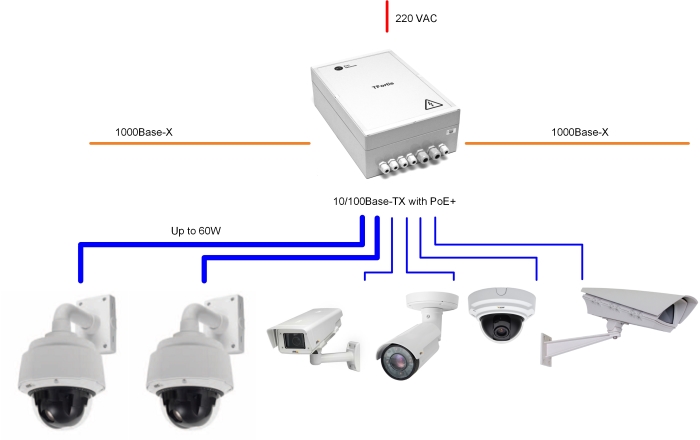 TFortis PSW-2G6F+ Managed 6-port Switch is convenient to fasten to a pole (support) with a mounting panel.

The main feature of the PSW-2G6F+ switch is powering via double PoE+ (IEEE 802.3at) due to which it became possible to power any PoE-video camera over simple Ethernet cable. This is implemented as follows. Over wire pairs 1,2 and 3,6 (mode A) is transmitted 30W and over pairs 4,5 and 7,8 (mode B) is transmitted 30W as well. As a result, the total load is 60W. Powerful devices support this power scheme. For example, outdoor PTZ-video cameras with a declared capacity of 60W. It’s important that this device supports operation of devices required simple PoE (IEEE802.3af) with max power consumption of 15W. 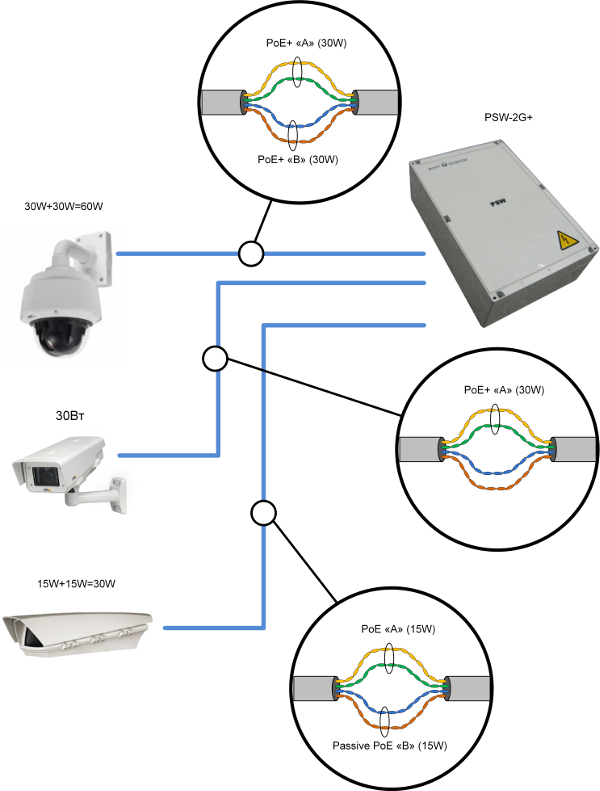 PSW-2G6F+ Switch has a version with a built-in optical distribution frame. It allows distributing optics directly inside the switch casing. There will be no need in external cabinet that will significantly save money.

Connecting devices «in a chain»

Two gigabit ports allow you to connect PSW-2G6F+ in a chain. Only one optical fiber is used. It is most relevant in case of leasing communication lines or lacking free fibers in an optical cable.

STP/RSTP protocols are supported for providing a Fault Tolerant Network. This provides additional communication channels between devices. In other words, each video camera has an alternative communication channel. In case of breaks in optics or the failure of a particular network node, traffic will follow alternative routes. It is recommended to use ring topology with RSTP protocol

Gigabit speeds allow you to download the total traffic, even from powerful video cameras, even when connecting them to the PSW-2G6F+, connected in a chain.

Gigabit ports are implemented by SFP slots. Now, you can use this type of SFP module that is the most suitable. Use the module for 2 km or 80 km, with a SC or LC connector, single-mode or multimode, etc. – you decide. If the distance is less than 100 m, you can even equip the SFP slot with a copper SFP module. According to the order specification, PSW-2G6F+ units can be supplied either with pre-installed SFP modules or without them.

The most critical moment in the operation of the video camera is the process of its activation at low ambient temperature. Precisely a cold start can cause the failure of an expensive video camera. To avoid such cases, PSW-2G6F+ unit is implemented with preheating of camera housings. The essence of it is that after power is applied to the unit, initially will be powered heating elements of camera housings but only after a while the video camera itself. This delay allows obtaining comfortable conditions for activation of video cameras, and you will be able to save expensive equipment.

Since the PSW-2G6F + powers cameras via PoE, the operator can turn on or off the video camera with a single mouse click, which is necessary when operating the video surveillance system.

Power inputs and ports that cameras are connected to have high-power surge protection elements (lightning protection). This allows both the PSW-2G6F+ switch itself and video cameras to function in an unfavorable electromagnetic environment.

PSW-2G6F+ does not require maintenance and is designed for 24-hour outdoor operation at ambient temperature -60 .. +50 °C* and above up to 70°С with less load.

The switch is managed through a simple and intuitive Web interface. Before installing the switch at the site, at first, it should be configured, at least set the network settings. During operation, you can check the status of links on ports, turn on or off the video camera, and diagnose the integrity of the line to the video camera and much more. A regular firmware update increases the device capabilities. This means that by purchasing today the PSW-2G6F+ with one set of features, tomorrow you can increase your functionality by simply updating the software. They are free and you do not need to dismantle the PSW-2G6F + for its’ upgrade. Everything can be done remotely over the network via a friendly Web interface.

Switch supports any gigabit SFP-modules.
Recommended SFP modules for use.

Warning! The kit does NOT include:

Declaration of compliance with the Technical Regulation of the Customs Union “On Safety of Low-Voltage Equipment”, “Electromagnetic Compatibility of Technical Devices” for Fort-Telecom equipment - PSW switches. No ТС RU C-RU.АЛ16.В.01739
Validity: 26.09.2014 - 25.09.2019
Download

Optical SFP-module 1Gbps up to 3 km

Optic SFP-module 1Gbps is designed for connecting TFortis PSW Managed Switches to optic fiber that is a trunk link.

Copper SFP-module 1Gbps is designed for connecting TFortis PSW Managed Switches to twisted pair cable that is a trunk link.